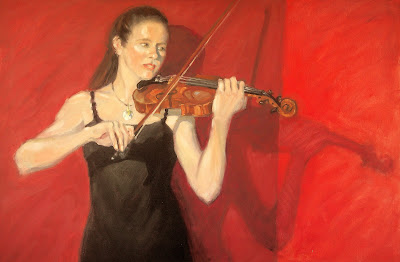 When I teach color theory, I always explain to the students, that in art there is an important difference between shade and shadow.
When light falls on an object, it illuminates the side that is facing the light. The other sides of the object, which are not pointing towards the source of this light, are in shade.
The object will, in turn, cast a shadow onto the surface which is underneath or behind it.
The change between an area in light and an area in shade can be soft and gradual if the object is rounded (like the forehead), or abrupt if it has corners or pronounced plane changes (like the violin).
Cast shadows have sharp edges close to the object that casts the shadow (like the cast shadow of the bow on the violinist´s arm) and softer edges the farther away from the light source the shadow gets (like in the case of the cast shadow of the arm and violin on the red curtain).
The handling of the brush strokes, using soft and hard edges, has to be according to that principle in order to give a realistic impression.
Posted by Ilse T.Hable at 7:28 PM

its perfect... just stumbled upon ur blog via my frnds page...

liked ur themes ...n liked ur stokes...keep painting..there are millions of painters in this world..gradually moving to billions..but very few has an ethinic touch...keep it up..

In photography I am not sure if we make the distinction between shadow and shade. But with the advent of the universal digital camera with its pop up flash the idea of shading one one side of the face is now alien. In fact Flemish paintins with their window lighting would seem alien to the 21st century world. Not too long ago I photographed a local logging executive (he had a very round face) with half face lighting (sometimes called narrow lighting) to make him slimmer. His ignorant communications officer kept pointing at the "harsh" shadow and asked me If I could get rid of it. In photography (and I would suspect in painting) shadows on a face and body suggest form in three dimensions. Flat lighting eliminates that third dimension. Shadows on a face are sometimes called modeling in photography.

I am faced with shade in my shady garden and everywhere I read about shade-loving plants. My friend W. George Schmid ( an expert gardener who lives in Atlanta Georgia) says there is no such thing and he corrects the situation to shade-tolerant plants. I have seen many of the plants in my garden diminish in size because of constant deep shade. Open shade under a tree is so much brighter. There are many degrees of shade and some gardners (this one in particular) use photographic light meters to measure the intensity or of shade.

This is great and enlarged it is WOW...

Dear Alex,
Thank you for leaving your comment on my blog. I agree, playing with light and shadow (shade and cast shadows) is just about the best tool for the representational painter, as it must be for the photographer. Without shadows everything looks flat and boring, like the half hearted effort of an amateur. But fashion dictates strange things..........

I have no words! Amazing! Wish I could paint like that!

Thank you Seemu, you are very good yourself with illustrator!