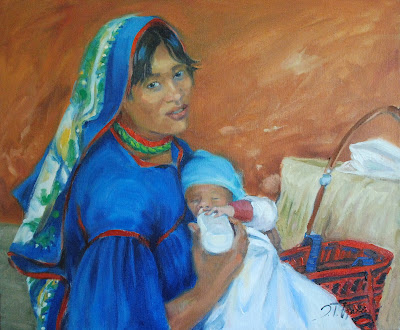 I am working on a series of ethnic Mexican scenes for a possible exhibition in my native Austria a year from now. Europeans seem to be very interested in the folklore of this country.
Due to its diversity in indigenous cultures, Mexico is extremely rich in native crafts and folk art: textiles, pottery, basket weaving, masks, jewelery, embroidery, wood carvings, rugs, hand painted decorative items, hammocks, toys, mouth blown glass - you name it, they have it.
This woman is a Huichol Indian. The Huicholes traditionally live in the Sierra Madre Occidental, where the States of Durango, Zacatecas, Nayarit and Jalisco meet. They were the only indigenous tribes that were not defeated by the Spaniards during the conquest and they continued to live in relative isolation until very recently. In the last ten years, more and more Huichol people have come to the cities to offer their beautiful and very popular yarn paintings, jewelery and other decorative items, which they cover with intricate designs in colorful beads. Their work has been shown in museums in the United States and other countries and they are now internationally famous.
Posted by Ilse T.Hable at 1:53 PM

The softness of her face is incredible. I like the colors and that precious baby. You outdid yourself on this one....and

the commentary is interesting. I learn something every time I come here.

Sandy, thank you so much! This is the kind of portrait I love doing, more about the character and expression than the exact likeness. I could write lots about the artistic aspect of Mexico, it is a fascinating country!
Ilse