Red pigments have an interesting history.
Up to the XIIIth century few people knew that the most beautiful reds were made from an insect which lives primarily on the nopal cactus in America and in the bark of a tree in Asia. The fact that the intense crimson red, used for cloth as well as for paint, was obtained by squishing thousands of bugs, was kept a secret for obvious reasons - it was not very appetizing. The name crimson, carmesí in Spanish, Karmesinrot in German and carmine in English, has its roots in the persian word "kermes"- the name for the bug.
The facts about another ancient source of red are not much better, at least not for the health of those who produced it: Vermillion was made by mixing mercury and sulfur, both highly toxic.
As was Lead- or Minium red: It was obtained by heating toxic lead white.
Apart from their repulsive or toxic ingredients, none of these reds were permanent.
What a relief that today´s artists don´t have to deal with any of that! 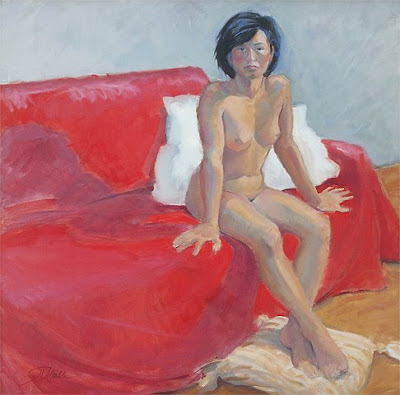