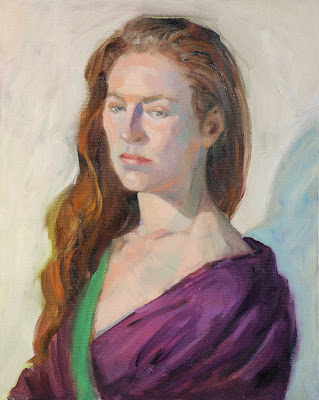 The modern aniline violet was discovered by accident in the XIXth century. A British student who was working on a remedy against malaria, tried to produce a synthetic substitute for quinine. He invented a beautiful purple instead.

In México, in the area around Tehuantepec on the Pacific coast, purple was made for centuries from an excretion of the púrpura, a sea snail. When squeezed, the animal produces a liquid which can be used to dye thread. The curious thing is that the thread first turns white, then changes its color to green, followed by yellow before it finally becomes purple.
A similar mollusk from the Mediterranean was used in the Middle East to produce another shade of violet. The difference was that its excretion had to be mixed with urine and lime in order to fix the color.
Posted by Ilse T.Hable at 2:36 PM

This is beautiful. And I enjoy learning from your posts. Never knew that about purple.